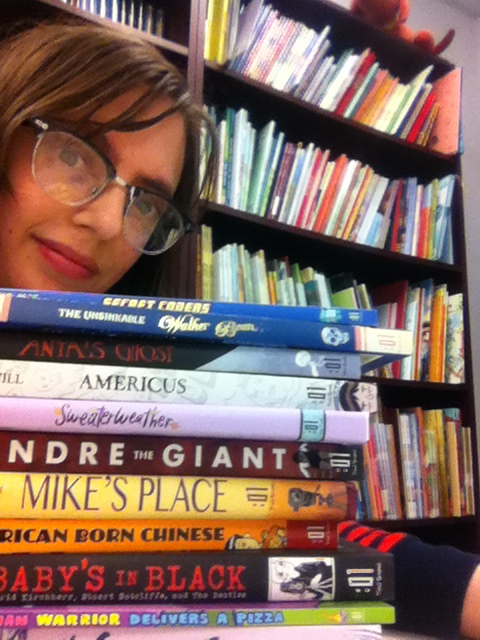 Since I moved back to New York five years ago, I’ve been juggling numerous jobs: usually working two at a time, sometimes three or four. It’s rough! But I want to live in New York City and I want to have a career/life in comics, as much as possible. It was the best I could do, and it was hardscrabble.

I had finally whittled it down to two jobs: part-time paralegal work for corporate lawyers and part-time editorial/admin work at First Second. I’ve been hoping to go full-time at First Second, and what can I say? Monday it finally happened.

I’m now an ASSOCIATE editor at First Second! That’s the highest level I’ve ever reached in the publishing hierarchy. If it’s not the big time, it’s definitely the medium time. I’ve spent over four years in trade publishing as a part-time employee, and always with “assistant” somewhere in my title. And this is the first time in eight years that First Second has added an additional editor to the staff. So this is no small thing!

So what does this mean for the Tiny Report? I’ve got to scale back, but I’m not calling it quits. I make no promise to blog regularly. (In fact, I can promise I won’t.) I want to make my online List a more robust table of information, and I want to publish the Micro-Press Yearbook. I think that’s what the Tiny Report will be.

Going forward, my day job is going to be primary creative endeavor. I’m still going to publish a bit, and I’m going to draw a bit. But my carreer as an editor is largely how I will contribute to the comics medium. (Or that’s the plan, at least–I feel like I’m jinxing it, just typing this.) There were certainly times in my life, especially when I was younger, when I wouldn’t have been satisfied with this bargain. I wanted to be a CARTOONIST, no ifs, ands, or buts. But now I’m ready. This is what I’m good at. I’m an editor. And, shit, it’s the best job in the world!

I don’t mean to carry on about me, me, me. But I’m really interested in what happens when a cartoonist takes on the role of editor or publisher. That’s one of the reasons I created the Tiny Report. There were financial and time-management challenges I expected, and social ones I didn’t. (See How to Talk to a Micro-Publisher Without Sounding Like a Jerk.) I’d be interested in what other people have experienced. Let me know.

My New Gig, My Old Gig

This blog isn’t really about me, so I try not to talk about myself too much. But here’s a little news: I’m now an assistant editor at First Second. I’ve got a nameplate and everything (with moomintroll and an original Jon Chad drawing).

I’d been working at the First Second office one day a week since August. At the end of the year I got the opportunity take on this editor position. I’ve worked for a few comics publishers in New York, and I’ve never found a better fit than this. I love their books, and I love the team.

But I did have to make a hard decision: I had to step away from my weekly gig at Desert Island. (And sorry, no, you cannot have my old job. Tyler Boss, who started working for Desert Island last fall, has taken over my old shift.) I’ll still be at Desert a couple of times a month, working the register and handling the consignment. It’s hard to walk away from the coolest job in Brooklyn.

For those of you who are keeping track, I still do paralegal work a few times a week and cat sit regularly. I’m still a very busy person. To be honest, I only have time to blog on my lunch break. But I’ll keep it up.