MICE 2015 Recap and Thoughts on the Kid Friendly Show

(Sorry for the lack of updates here at the Tiny Report. The demands of my real jobs have been taking priority lately.) 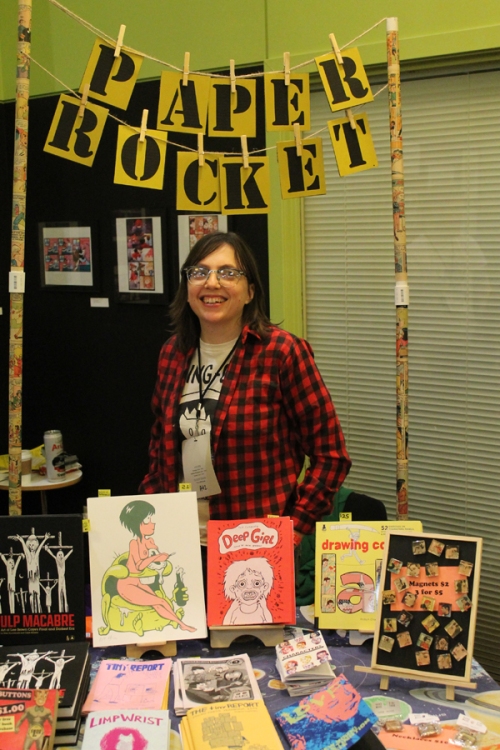 MICE was, I think, the seventh show I tabled at this year (and I’ve got two more to go). That’s way too many shows! This year has been all about preparing for shows or being at shows, it seems. Shows are on my mind alot.

And MICE was a good show. It’s very exhibitor friendly: the tables are cheap, the staff is friendly, and volunteers fed us non-stop. The free food at the after-party was especially tasty, and mostly vegetarian. I don’t think I’ve been better tended to at  show.

The programming looked strong: tailored to the moderators and panelists, and not cookie-cutter subjects. It was really refreshing to see so much programming focused on black cartoonists across conventions this year, and MICE was no exception. I don’t know if ever saw a black cartoonist panel in a program schedule before 2015, and I think I’ve seen four or more this year. Black Lives Matter is making an impact in this community.

The hall where the panels were held was great: excellent AV and auditorium seating (one of the benefits of holding a show at a college). I sat on a minicomics panel, which I think went well. One irksome thing was that this panel, for reasons I don’t understand, was marked kid friendly. While none of our material was overly risque, I was told parents walked out. Irregardless of the material, this just wasn’t a topic that was really accessible to the young. It was technical, and focused on varsity-level printing and binding techniques.

It’s clear that MICE went out it’s way to make this a welcoming show for parents (tables were also marked kid friendly). I certainly don’t want show to be kid-unfriendly, but I wonder if it’s such a good idea to market so heavily to buyers who often have little to no interest in the majority of the work that’s there. MICE is a tiny show: it inhabits a number of small rooms and a few hallways, which isn’t ideal. The space was so cramped that customers could hardly make it to the tables. In a situation like this, I would expect sales to be brisker. From where I was standing, it seems like the things that were really selling were kids graphic novels published by major house: that is to say, books you could find in any Barnes and Nobles. It would benefit sellers like me, who have little to no content for children, who come from the tradition of underground and alternative comics, and who actually make small press comics, if this show catered more to buyers who are interested in that. I guess MICE has limited control over the audience it attracts, but I think perhaps RIPE and CAB strike a better balance.

If I sound cranky, I apologize. I’ve got no gripe against kid comics from major houses: that’s what I do for my day job, and I love it. I’m just trying to figure out how a indie comics show can be a cultural event that benefits the local community, that’s welcoming rather than insular, and still attracts the kind of people who are (or potentially could be) buyers of independent comics. Brooklyn Zine Fest is one of my favorite examples of this in action.

So sales were so-so, especially with strong SPX sales fresh on my mind. But when I did the math and took into consideration the low table cost ($80 for a half) I came out ahead at MICE. The high cost of lodging took a bite. (I stayed at an airbnb, as did many people I talked to, since it seems impossible to find even a private hostel room for less than $100). But all in all, MICE was an excellent show, one of the better run ones I’ve attended, and I’d be happy to do it again.

The scene from the floor. MICE is a pretty cramped show. 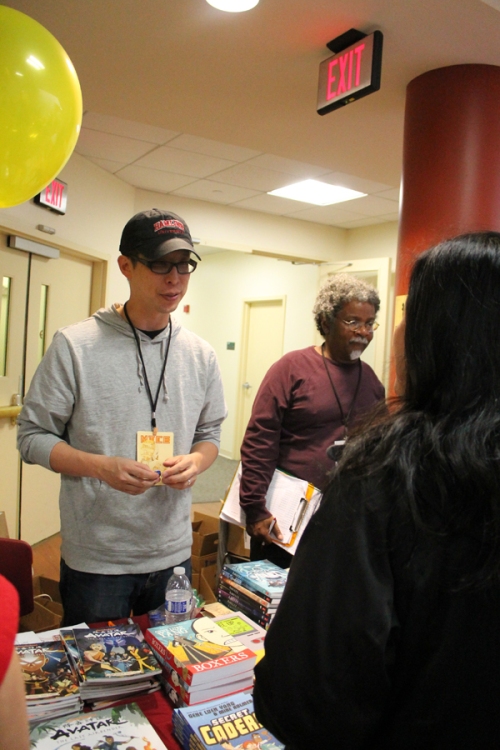 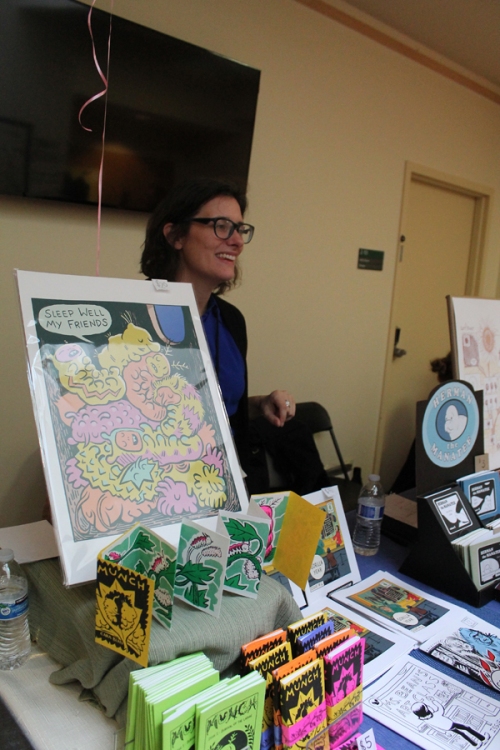 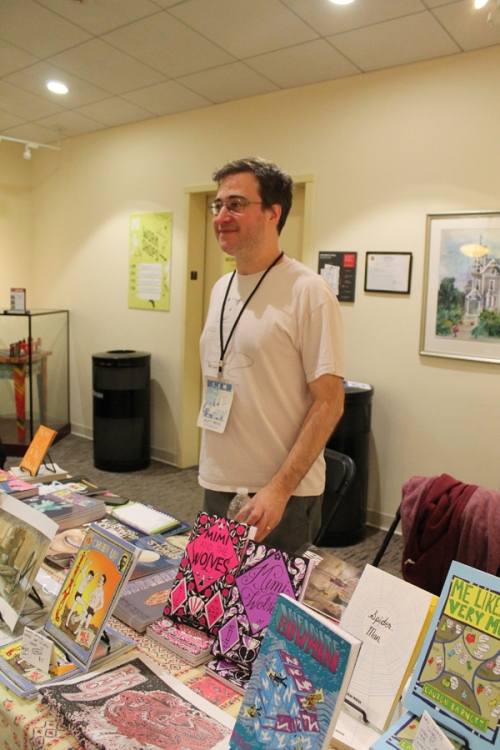 Matt Moses of Hic and Hoc.