Did you hear? You can pre-order the Micro-Press Yearbook 2014 on my Kickstarter.

I’ll be releasing the zine at Desert Island in Brooklyn this Thursday. I’ve also invited two micro-presses from the neighborhood to join: So What? Press and Revival House Press. It will be a micro-press party, which is kind of like a Tupperware party, except we’re selling small press comics. 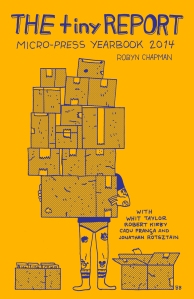 This entry was posted in Uncategorized and tagged events, Micro-Press Yearbook, Revival House, So What. Bookmark the permalink.